The Falcons cross country team had quite the impressive season going, winning or placing highly in almost all their races. Most importantly they won the state meet, through the leadership of leaders Matthew Tolman and Rhys Allen.

The win was really exciting for all the seniors because two years ago they got second place and last year they got fourth, just off the podium. The team blew everyone out of the water, ending up with 70 points, which no other team was capable of achieving. The closest team to competing was Manhattan High School with 100.

Tolman played a big role in the team’s success not only in the state meet but throughout the rest of the season as well. He placed first in his class and sixth in the state overall.

“To finally come out this year and help the team reach our goal of a state championship really meant a lot,” Tolman said.

Originally Tolman looked at cross country and track as an alternative to keep him in shape for soccer. “Around fifth grade I began to run 5k’s like the Jared Coones run and that inspired me to run cross country in sixth grade,” Tolman said.

But as time went on running became a big part of his life and he began to run everyday to get better. Runners take on a substantial amount of work in a week of cross country practice.”

“We have one long run a week, which is about 13 miles, and then one work out a week. The workouts consist of running at different paces and distances. For the rest of the practices, we have recovery days and it ends up at about 50 miles every week,” Tolman said.

It all paid off, as the team was ranked first and projected to win \

“We almost lost two weeks before to Olathe East,” Tolman said. Instead they were on their A game, running their best they had all year as a team, when it mattered most. Their leader, Tolman, ran a 16 flat or 16:00, setting the tone for everyone else. To break it down into mile intervals, the run was about 3.1 miles long, meaning he ran at an average of 5:07 per mile.

Tolman credited Coach Pope, the head coach of cross country and teacher at Sante Fe Trail Middle School, for his success. “He stuck with me in my bad times and got me to where I am today,” Tolman said.

Tolman also recognized Rhys Allen, a senior teammate of his, for helping motivate him. “We have been running together for 7 years now and he helps keep me motivated and going when I don’t want to”. 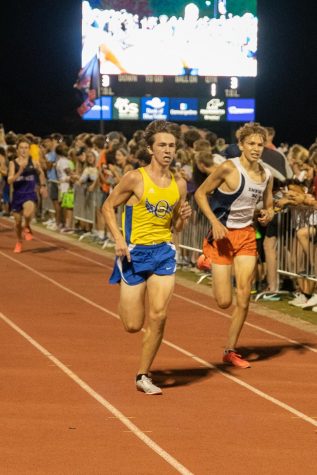