“White Chicks” could never hold up in current society 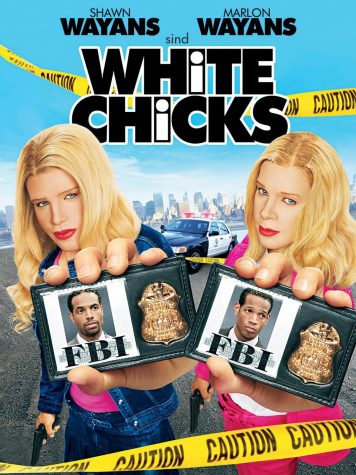 The movie “White Chicks” came out in 2004 and for the first time in my life, I watched it with my family. While watching, I noticed some things, things that would never be allowed in today’s society. While it’s all in good fun, and comedy, the things in that movie, even the premise, would be frowned upon today. Two Black FBI agent brothers Marcus, played by Marlon Wayans, and Kevin Copeland, played by Shawn Wayans, turn into Brittany and Tiffany Wilson, two white, blonde-haired, blue-eyed, spoiled rich sisters.

There are many things that are frowned upon these days, even in just the plot. For instance, the two most obviously wrong things, it’s a Black man playing a white girl. There is both a change in race and in gender, which would never be allowed in today’s society. While it really is funny because of what the guys have to go through, it could be seen as offensive.

With the swapping of genders, it would depend on the person seeing it. There are movies about people who are transgender, such as “Transparent,” “Romeos,” and “Southern Comfort.” That being said, “White Chicks” isn’t about that. There are shows and movies with drag, which is basically what they’re doing, but not for the purpose of being a drag queen. So, as for everything else, there are people who will just laugh and appreciate the comedy, and there are people who would say it’s offensive because they are men dressing as women.

Also, toward the beginning, the guys are girls for the first time at the hotel, and a few guys catcall Marcus, as Tiffany. Almost immediately after, two more guys come out and do the same to Kevin. Both of them respond with a variation of “you wanna fight?” While this is funny, it’s guys objectifying women. This happens a couple times, especially with the character Latrell Spencer, played by Terry Crews.

Another major problem is the fact that Latrell Spencer buys Tiffany, really Marcus, for a date. Latrell is a big, muscular, self-absorbed, womanizing Black man. While on their date, he orders oysters, a natural aphrodisiac, and slips something in her drink at the club to make her feel aroused, his whole plan- to use her. Marcus switches the glasses, however, so Latrell gets said drink. Later, he is shown dancing on the dance floor with whistles and glowsticks, topless.

Another problem is when the guys, as the girls, are in the car with Tiffany and Brittany’s friends. The song “A Thousand Miles” by Vanessa Carlton comes on, and all the girls sing along to it. After Marcus and Kevin don’t know the song and bomb trying to sing it, the girls change the station. The song that comes on next is a rap song and Marcus and Kevin sing along to it, dropping the n-word, as the song does. The white girls turn to them, surprised and appalled they said it, to which one of the guys responds “no one’s around to hear it,” and all five start rapping and using the word. This specific scene is one that probably angers many. The word is one that is, and always has been, frowned upon for white people to say, so the fact that Black men say as white chicks and then go on to say it’s okay for white people to say it would definitely catch a lot of flack.

Overall, “White Chicks” is a hilarious movie, but in today’s society, it would have never been released. We’ll never really know if the first one could have come out, but there is talk of a second one from the Wayan brothers and other characters, so they’ll have to cross that bridge when they get to it.