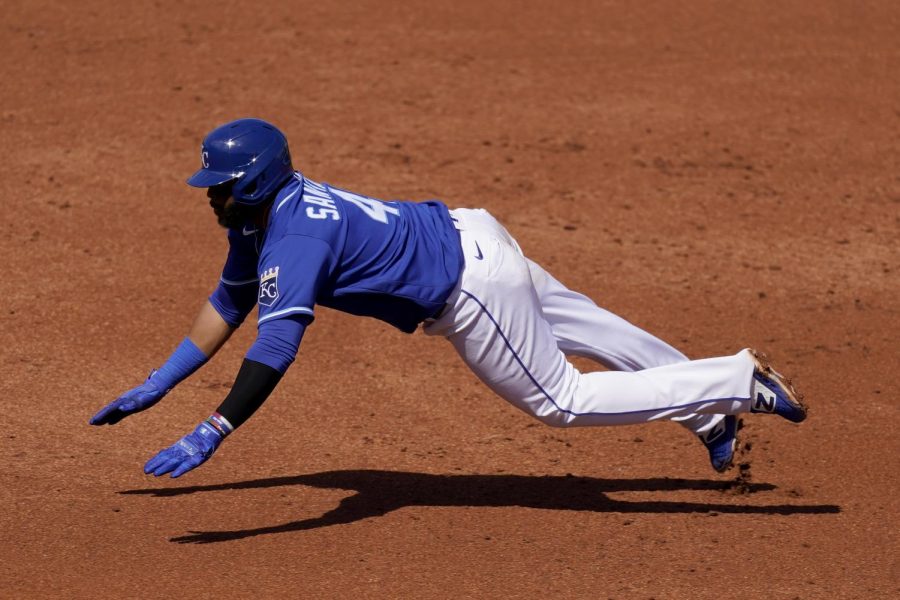 Royals first baseman Carlos Santana dives into third base during a game against the Texas Rangers. Santana was signed in the offseason in effort to boost the Royals’ offensive production from the middle of the batting order.

After an extremely active offseason that included signing a big power bat and a left-handed-hitting outfielder, the Kansas City Royals are starting Spring Training with high expectations, especially for a team that lost the equivalent of 92 games in 2020.

Carlos Santana was the marquee signing of the offseason, as the switch-hitting Dominican will be expected to fill a first base position that has been lacking in recent years, with Ryan O’Hearn and Ryan McBroom splitting time there over the past three years to little success. Though he had a down year last year with the Cleveland Indians, hitting .199 with a .699 on-base percentage plus slugging percentage (OPS), he nearly kept pace with his career on-base percentage (OBP) of .388 even though his batting average was 50 points lower than his career mark.

The Royals likely did not put much precedence into Santana’s 2020 season, as the year was relegated to 60 games, with no chance for players to break out of a slump. Baseball Reference projects Santana to return to his old self, with a projected .787 OPS, which would have ranked second on the team last year, with 24 home runs.

Andrew Benintendi was the other big hitter the team added, getting him in a three-way trade with the Boston Red Sox and New York Mets. Benintendi, much like Santana, struggled immensely in 2020, as he was marred by both a rib injury and bad statistics, missing a month and a half on the injured list and hitting an absolutely dismal .104 with a .422 OPS. There is reason to believe that his season was a fluke, as the two seasons prior he had 40 or more doubles and played in more than 130 games. He is very much a worthy successor to Alex Gordon’s spot in left field, as he actually lost two Gold Gloves in a row to Gordon.

The other big signing of the offseason was reacquiring an old friend, as the team brought back one-time reliever Mike Minor on a two-year deal. He is expected to fill a middle spot in the rotation and bring veteran presence to a pitching staff whose oldest surefire member (other than Minor) is 28 years old. Minor is a serviceable lefty who was wonderful with the Texas Rangers for the past three seasons; his numbers fell off a bit when he was traded to the Oakland A’s in the middle of 2020, but he will benefit from playing in a pitchers’ park like Kauffman Stadium once again.

Pitching as a whole is the strong suit of the team heading into spring, with both the rotation and the bullpen looking as strong as ever. Brady Singer and Brad Keller are expected to lead the rotation and are both in a battle to be the Opening Day starter; the supporting staff is much more interesting however, as Minor and Kris Bubic are locks, while Danny Duffy and Jake Junis are seemingly in a battle for the fifth and final spot. Duffy has the edge in this battle based both on seniority and stats from the previous season, as he is entering his 11th season as a Royal, and though he had an unsightly 4.95 earned run average (ERA) in 2020, he was much better than Junis, who was demoted to the bullpen for the final two games of the season and carried an ERA consistently above six.

A dark horse candidate for the rotation could be another one-time Royal in Ervin Santana, who previously pitched for the club in 2013. The righty has not pitched at the Major League level since 2019 when he pitched to a 9.45 ERA with the Chicago White Sox, but coaches have stated that he looks just as good as he did when he first suited up for the team. He’s 38 years old but is only on a Minor League contract and if he doesn’t work out, the Royals can just release him. This likely will be his last shot at a comeback before hanging up his spikes.

Finally, the Royals signed utility infielder Hanser Alberto in an effort to solidify their infield after second baseman Nicky Lopez’s struggles offensively. Alberto was subpar during his first three Major League seasons with the Texas Rangers, but was excellent during his stint in Baltimore, where he hit .299 in 2019 and 2020. He was primarily their leadoff hitter, but given that Whit Merrifield will be the Royals’ leadoff man, Alberto figures to be a bottom-of-the-order bat.

With all the additions, the Royals very well could be a playoff contender as they were in 2013, as they have a stellar young pitching core and a deceptively good lineup. A winning record definitely isn’t out of the question, but a lot of things will have to go right for that to happen.