The simple majority opinion means nothing if something so serious as an insurrection goes unchecked. 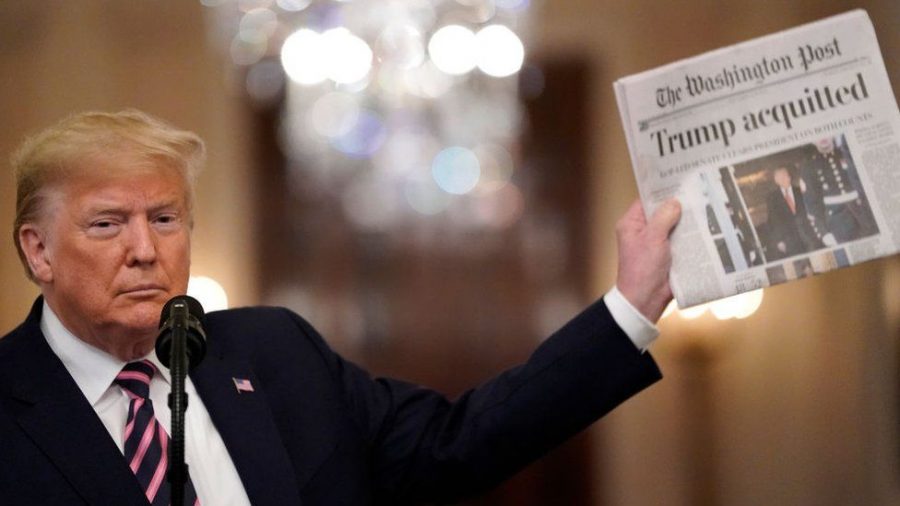 Former President Donald Trump’s impeachment trial ended unsatisfactorily in a 57-43 vote, 10 short of the super majority vote that would convict him. Though the results are disappointing, six more republican Senators voted against him than did in the last impeachment trial. The reality is, the efforts of those 48 democratic Senators were futile; even after a substantial amount of evidence indicating that the former President placed even his own Vice President in mortal danger, the results from Feb. 13 make it clear that the Republican Party remains entranced by and in support of Donald Trump, and the failure of the impeachment proceedings mean that Trump might be able to utilize this seemingly tireless support in the 2024 election. Moreover, the outcome of the trial proves that regardless of the magnitude of a President’s misdemeanor, they are relatively free of repercussions so long as they are popular enough with their party.

While he cannot be penalized by Congress, Trump can still face criminal charges; a good few of them are well underway. But no amount of prosecution can truly prevent his second try four years from now, as felons are still eligible to run for office. And while a criminal record certainly won’t look great on his resume, it doesn’t matter; he will not be winning in 2024. However, what he will do is take away votes from way too many Republican candidates hoping to unify the party. And even after he is out of the race, whatever candidate he throws his support behind will gain millions of votes overnight. His influence really is that powerful, and it should not be ignored, even if it declines in four years. Whether DJT will run again is still uncertain, though the prospect of a vengeful comeback is too juicy for both him and his supporters to pass up on. Additionally, Trump has demonstrated time and time again the extent of his egomania, which ensures that “giving up” isn’t an option. Should his arrogance make him try again, the Republican Party cannot hope to heal itself from the polarization he enforced during his time in office until the election that will come after.

42 republicans and one independent all agreed that Trump’s actions should go unpunished. Trump, who encouraged his supporters on Jan. 6 to “fight like hell” and to “stop the steal,” while still in power, is innocent in the eyes of 43% of the Senate. The simple majority opinion means nothing if something so serious as an insurrection goes unchecked.

New presidential privileges that go uncontested tend to remain in place for future administrations; the early 1900s saw a rise in “trust busting” Presidents, with Executors dipping their hands into the free market. A few decades later, FDR expanded the capabilities of the federal government during the Great Depression and then again for WWII by regulating business under the guise of “interstate commerce.” Truman, Eisenhower, and Kennedy, among others, entered into foreign conflicts without a Congressional declaration of war, which was practically unthinkable in the 1800s, and since then, the President has become the largest authority on foreign affairs.

No stranger to testing the limits of his power, Donald Trump has on many occasions commented on the total authority that his former position afforded him, and with that authority, declared a national emergency to begin construction of the southern border wall, advertised for his family’s many businesses, urged Governor Kemp to convince state legislators to overturn Biden’s victory within the state of Georgia, and even publicly discussed pardoning himself and his family. Now, he has incited violence against the capital in the lame duck months of his presidency and will, yet again, get away with it. The results of Trump’s 2nd impeachment trial only further prove his theory that the President of the United States is untouchable.