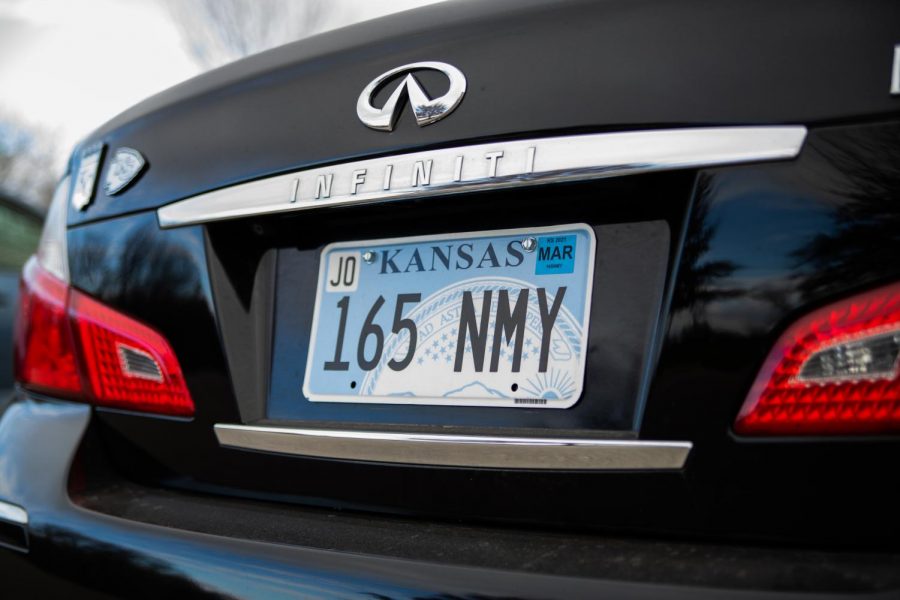 A new, flat Kansas license plate displayed on a car. The state began issuing flat license plates in August 2018, much to the chagrin of some. This license plate has been used with the permission of its owner.

In April 2007, the state of Kansas began to hand out license plates with a new design, which were a light blue with part of the state seal featured. Another variant of the same design was issued in August 2018 when the state turned to 3M to manufacture new plates. This switch ended the manufacturing process that had been used for more than 100 years and in turn ruined the looks of the license plates, as they are now flat and cheap-looking.

Before the fateful decision to move on to flat license plates, the only changes to the state-seal plate were minor ones, as the registration sticker had been made larger and only a few had to be recalled due to a perceived ethnic slur inadvertently issued in the “JAP” series. However, instead of being embossed, the new plates both look and feel cheap, with a barcode on the bottom right corner that, when scanned, simply read the license plate number. There is a much more serious concern to be had though, as without embossing the letters and numbers, differentiating fake plates from legitimate ones becomes much harder without the aid of a lookup system.

Then-Kansas governor Jeff Colyer lauded how much money the switch would save the state and its taxpayers and how efficient the process would be before ironically delaying the switch by two weeks after experiencing issues in the digital processing system; however, the decisions of other states put that praise into question. In Colorado, citizens registering their vehicles have the option to purchase an embossed plate for $1.63, while flat plates cost 56% more, with a $2.54 price tag. Four states – Alaska, Mississippi, Nevada, and North Carolina – made the unprecedented moves to actually revert back to embossed license plates after stints with the flat ones. The North Carolina DMV cited two main reasons for making the switch back: they received thousands of complaints from motorists and police alike sharing their dissatisfaction with the quality, and the state did not save any money because their scrapping rate skyrocketed in the one year the flat plates were issued. In 2005, Wyoming legislature actually proposed new legislation that would have reverted the state back to embossed plates had it passed. Currently, they still offer to emboss plates for an additional fee, but they are not printed using the same process as regular embossed license plates.

Only 16 of the United States are currently issuing flat license plates, and for good reason; flat license plates are much more susceptible to being torn or crumpled like a piece of aluminum foil, as they oftentimes are much more thin than traditional ones. Many plates by 3M in recent years have been subject to peeling or graying in a matter of months, and some states, such as Minnesota, require plates to be replaced after a set number of years because of durability concerns.

Legibility can also be an issue;  at night when cars have their headlights shining directly on the back of another car, making out the combination of letters and numbers can be near impossible. In a state like Kansas, where there are many dirt roads in nearly every county, a license plate can become illegible much more easily than a regular plate when it gets covered in dust, with no chance to make out the number; at least if a regular plate gets covered, the number can still be made out, albeit with difficulty.

A license plate is supposed to represent your state on a 12 inch by 6 inch canvas, and arguably the most iconic symbol of Kansas is the wheat stalk. The state seal design is the first regular-issue Kansas license plate since 1979 to not feature a stalk of wheat, and the first-ever graphic design to not feature it, so why get rid of it? Whether Kansans like it or not, the thought that comes to mind when their state’s name is mentioned is wheat, so having a license plate without that image is an incomplete one. When Kansas comes to mind, no one thinks of the state seal, so why prominently feature it on the license plate that will be seen by the rest of the country?

Wheat stalk notwithstanding, the current design has been issued for the past 14 years, which is two times the runtime of any other non-permanent tag Kansas has ever issued. The state-shaped plate was very popular when it was issued from 1950-1979; a switch back to that design would be a welcome change for a state with an illustrious past of license plates. 29 of the remaining 49 states have significantly or totally overhauled their license plate designs since Kansas issued the design in 2007, meaning that it’s a due change. Don’t be confused; too much change is also a bad thing, as is the case with neighboring Nebraska’s (three designs in that time period), but at least it shows that they are trying to be creative and change it up.

An overhaul of the current license plates issued in Kansas is not a want, it is a necessity to ensure that victims of hit- and-runs, the police, and other motorists can read the license plate in front of them for whatever reason. It is necessary to showcase Kansas not just as flyover country, but as a state with standards that are as high as any other state, and a state that citizens are proud to be from.