Winter sports will continue with parents in stands 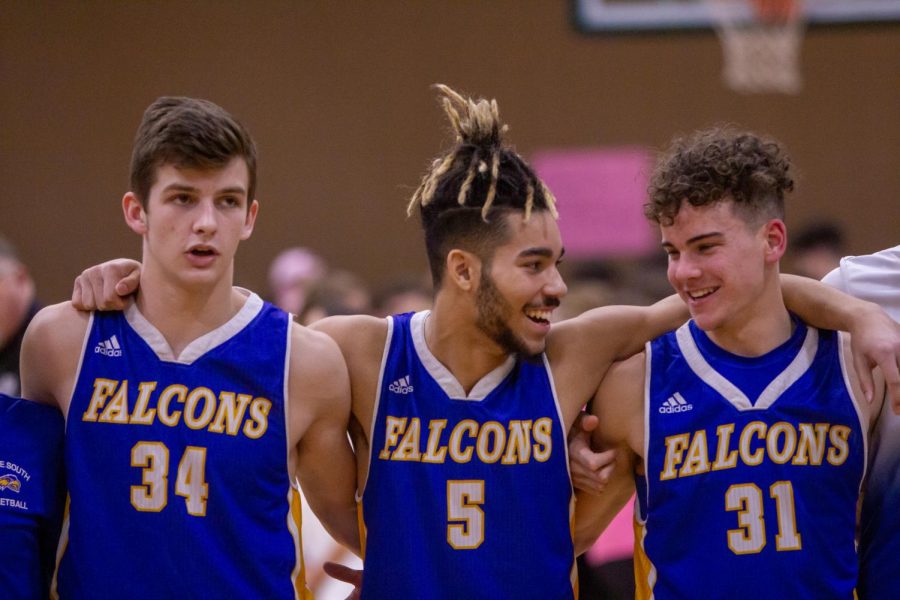 Braidan Odell, senior, puts his arms around two of his teammates in a game from last season. Odell and the rest of the team will just have their parents in the stands to watch them play, as the traditional student section will not be allowed.

Basketball, swimming, bowling, and wrestling seasons are hanging in the balance with the Johnson County Department of Health and Environment issuing a statement urging school districts to abstain from having winter sports seasons. The statement was made due to concerns about the rising cases of COVID-19 in Johnson County and across the country as a whole, with positive tests topping the 100,000 mark every day since Nov. 4 and county numbers reaching an all-time high of 6,846 on Nov. 17.

The announcement was made on Oct. 27, just weeks before the Blue Valley and Shawnee Mission school districts announced plans to return to a fully-online learning environment, adding an extra layer of complications. The Olathe School District followed, even though the number of positive cases have been significantly lower than the other two districts making up the “Big Three” of Johnson County.

The main concern with hosting games during winter is the spread of COVID-19 indoors, as fresh air is constantly moving, while indoors air is just being recycled around a room, no matter if it’s in a gym or a locker room. Additionally, close, physical contact is a concern, with players sweating on each other throughout entire games; players are not locked in a bubble to ensure they aren’t exposed, nor are they being tested multiple times a day as professional sports leagues did. If a basketball player or wrestler unknowingly has it, it’s virtually guaranteed that they will spread the virus to opponents or teammates. This was showcased when an unknown wrestler tested positive, delaying the wrestling season by two weeks.

Swimming, however, is much more feasible, as the CDC has stated that “it’s unlikely that the new coronavirus can survive in a pool that’s properly maintained,” and there isn’t any evidence that COVID-19 can spread through water in a pool. Bowling is also possible, as bowling alleys across the city have stayed open with proper social distancing the entire time.

Neighboring Miami and Franklin counties will be, barring anything unexpected, continuing on as planned, meaning that athletes from those schools will get an unfair advantage in recruiting and could see an increase in transfers during winter break from those coming from Johnson County, just as was the case during fall for football; when football was in question, several students and their parents moved to Iowa so they could complete their high school careers and get an opportunity to compete for a spot at the next level without having to worry about what the state, county, or school district did.

It was a given that games would be played behind closed doors just as the football and soccer seasons were, with families only given two tickets per player. With an indoor environment, however, family members were originally not allowed to attend, with that decision quickly overturned with a 7-1 vote. With today’s technology, games could also easily be live streamed using services such as YouTube or Hudl.

If some winter sports do get cancelled at some point, the effects will largely outweigh the benefits, as athletes in their senior year seeking scholarships won’t get the opportunity to showcase their talents for one final time and get game footage for schools looking to recruit. This takes away potential opportunity to get some of their college paid for, athletes that are fully deserving of roster spots on a college-level team. If an athlete isn’t pursuing college athletics, then they should still be given the opportunity to complete their sports career on a good note.