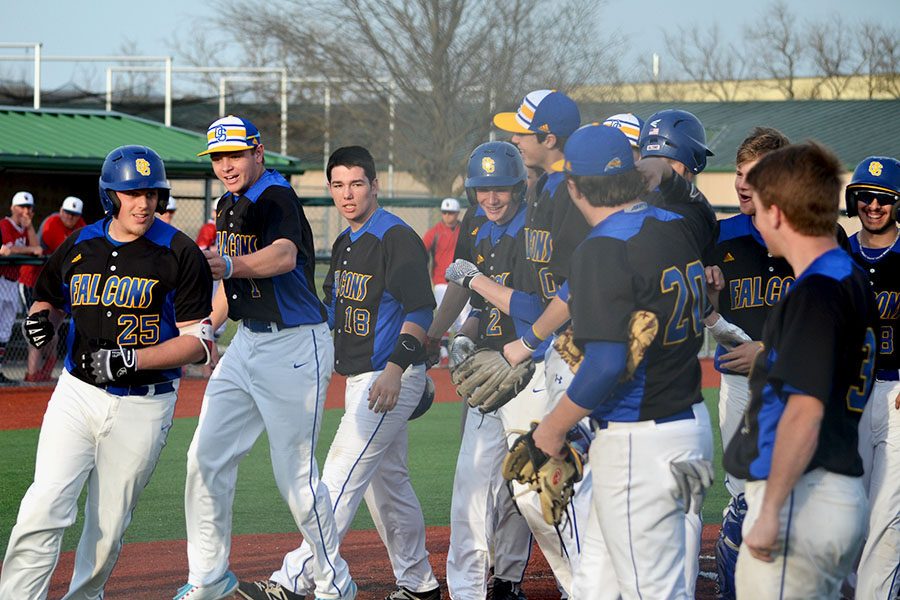 The baseball team returns to the dugout after celebrating a home run against Olathe North. It was announced on March 18 that there would be no fireworks this year, however, as all spring sports have been canceled in their entirety.

Less than 24 hours after it was announced by Kansas governor Laura Kelly that school buildings in Kansas will be closed for the remainder of the school year, the Kansas State High School Activities Association (KSHSAA) announced that all spring sport seasons will be canceled in an attempt to minimize the transmission for the COVID-19 disease. This includes baseball, softball, track and field, girls soccer, girls swimming and diving, and boys golf.

With this announcement, high school athletics have become the final domino to fall after all the major North American professional sports leagues canceled or suspended their seasons. College sports followed, as the National Collegiate Athletics Association (NCAA) canceled all of their spring sports as well. The resulting scene in the sports world is barren, with a sense of complete inactivity that has never been seen before.

The decision came after KSHSAA had already suspended sports activities, including practices and games alike, through March 22 and also after the Olathe School District announced that all buildings would remain closed until April 6. All of the schools in the district were undergoing a deep clean while the status of the sports seasons was increasingly put in jeopardy.

Many students were looking forward to this season, including sophomore Ethan Guerra, who was slated to start his first year at the varsity level for the baseball team as the starting second baseman. “It’s frustrating that the season was canceled,” Guerra said. “Any time baseball is canceled it’s a missed opportunity to play, varsity or not.”

Senior Jake English, a three-year varsity starting catcher for the baseball team, was also very disappointed in how the season ended before it began. He said, “I’m pretty sad that it had to end the way it did and that I didn’t get to play one more year with some of my best friends.”

There was also a sentiment among some that the season was canceled prematurely and that it should have been reevaluated at a later date, perhaps at either the March 22 expiration date for the previous suspension or when school was supposed to be back in session on April 6. “It was a decision that KSHSAA felt necessary to make to stop the spread of the virus, but I felt it was a little early to make that decision,” Guerra said. English felt that they are “doing their best to keep everyone safe and healthy,” and respects the difficult decision that was made.

KSHSAA issued a press release to address the uncertainty of the upcoming season, saying, “As a commitment to the health of Kansas students and communities, the best decision and only reasonable response is to cancel the regular season and post-season spring activity.” The organization also went on to say that it discourages participation in non-school activities while the threat of contracting the novel coronavirus exists.

This also brings an unceremonious close to the high school careers of the seniors that would have been playing. English felt frustrated for him and his senior teammates, which included Maverick Hanna, Jackson Jaekley, and Gavin Rein. “I’m really upset that I won’t get to finish,” English said. “I felt that I had much more to prove and that this year was going to be a great one.”

Despite the frustrations of all the recent events, English, who is committed to continue his baseball career at the University of Kansas, also reflected on his experience during his high school career. “The three years I got to play were amazing and some of the best times I had playing the game,” he said.

The cancellation of the season and of face-to-face schooling as a whole is the latest shock in a still-developing crisis that simply cannot be adequately expressed in words. In less than a calendar month, the entire world has come to a screeching halt, with no facet of life untouched, including sports or schooling. “We are in an unprecedented time,” superintendent John Allison said in a statement. “It requires all of us to work together in support of our community.”