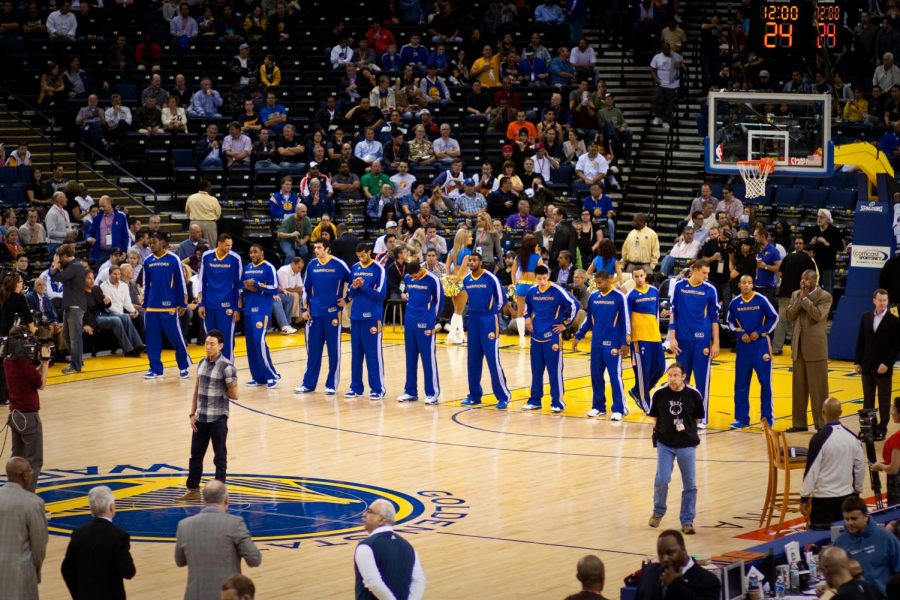 The Golden State Warriors line up before a game against the Detroit Pistons. The Warriors may be forced to relocate some games to Kansas City due to the ongoing coronavirus pandemic.

With the outbreak of the COVID-19 virus continuing, multiple sports leagues have considered cancelling games, playing them with closed doors, or relocating games to neutral sites in cities that have not had massive outbreaks. This has opened up the possibility that the National Basketball League will return to Kansas City for neutral site games, and could possibly even host a team for the time being as Oklahoma City did for the New Orleans Hornets when New Orleans was ravaged by Hurricane Katrina.

The Kansas City metro area has been searching for an NBA to call its own since the Sprint Center opened in 2007. The building has hosted countless college basketball games for KU, K-State, and Mizzou, as well as a handful of preseason NBA games with numerous teams playing the host team (most recently in 2016 between the Miami Heat and Minnesota Timberwolves). This, however, would be different if a team were to temporarily move into the Sprint Center.

If this were to happen, it would be the first chance for Kansas City to prove itself as a viable market for the NBA since the Kings relocated to Sacramento following the 1984-85 season. The city has been pining for a team in recent years, since the Sprint Center replaced Kemper Arena, which had been noticeably aging in the years before its replacement opened.

One team that might consider moving would be the Golden State Warriors; once a dynasty, the team has fallen on hard times due to losing Steph Curry and Klay Thompson to injuries. They are dead last in the NBA in terms of record, sporting a league-worst 15-50 record. Additionally, it was announced on March 11 that they would be closing the doors to their new arena to fans until March 21, at least. The team will “continue to monitor this evolving situation closely to determine next steps for future games and events,” according to a press release from the team.

If teams do decide to play games without fans, it would be an entirely different feeling than when the Baltimore Orioles played for an empty stadium in the days surrounding the death of Freddie Gray. There were still fans outside the gates cheering on the Orioles, but they play in an outdoor stadium; all NBA arenas are indoor, meaning the only sounds would be the broadcasters, players, and coaches, and the fan atmosphere would be nonexistent.

Other leagues have also considered moving or cancelling games; Major League Baseball’s Seattle Mariners will be forced to move their season-opening series due to Kay Inslee, the governor of Washington, issuing a ban of gatherings of more than 250 people. The possible locations for these games include Arizona, Texas, and Minnesota. The NCAA is also strongly considering playing games without fans for its upcoming national tournament, which features teams from all over the country.