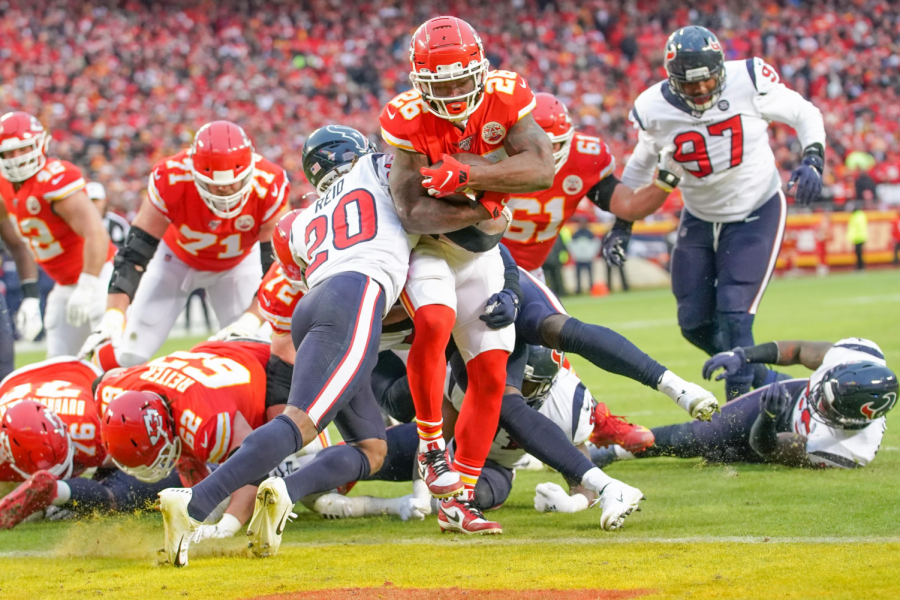 Damien Williams, running back, rushed for a touchdown in the Chiefs' playoff matchup against the Houston Texans.

The Kansas City Chiefs eradicated over 50 years of frustration on January 19, as they won the right to go to the Super Bowl with a 35-24 victory over the Tennessee Titans. The game represented the Chiefs’ first ever win in an AFC Championship Game, as they had previously lost their previous two in the 1993 and 2018 seasons.

Many fans came into the game in fear that they would see a repeat of the Week 10 game between the two teams that saw the Titans erase a nine-point Chiefs lead to come back and win 35-32. That game was Chiefs quarterback Patrick Mahomes’ first back from a knee injury that sidelined him for two and a half weeks, and even though he threw for a season-high 446 yards, he looked uncomfortable while moving and didn’t attempt to rush the ball once.

The Chiefs, on the other hand, went into the game still riding the high of completing the best comeback in franchise history, beating the Houston Texans 51-31. However, they were given the task of stopping the seemingly invincible Derrick Henry, Titans running back, who rushed for over 180 yards in his previous three games, becoming the only player in history to do so. The Chiefs’ defense stopped him, allowing 69 rushing yards, which significantly handicapped the Titans’ running game.

The Titans began the game with both a 10-0 and 17-7 lead, the second and third times the Chiefs faced a double-digit deficit this postseason, respectively. After coming back from a 24-0 deficit against the Texans the week before, however, the offense once again whipped themselves into shape; after the second Titans touchdown, the Chiefs went on a 28-7 run that was highlighted by what very well may be the best play of Mahomes’ young career.

The 24-year-old quarterback scored on a 27-yard rushing touchdown, but in the process, he put his mobility on full display, running a total distance of over 64 yards before finding the endzone to put the Chiefs in the lead for good. Before he broke to run, Mahomes dropped back to the 36-yard line, then broke towards the sideline where he saw an opening. Mahomes eluded five attempted tackles by Titans defenders before powering himself across the goal line, leaving 11 seconds on the clock in the first half, forcing Tennesse to kneel out the half.

Andy Reid got rid of past ghosts of his own with the win, as he won his right to return to the Super Bowl for the first time since his 2005 berth as head coach of the Philadelphia Eagles. Reid will attempt to win his first career Super Bowl, as he lost Super Bowl XXXIX 24-21 against the New England Patriots. He currently sixth all-time on the NFL’s win list, and has the most wins by a head coach without a Super Bowl ring with 221.

The team, meanwhile, will be participating in its third Super Bowl in history and its first in 50 years, when they beat the Minnesota Vikings 23-7 in Super Bowl IV. The Chiefs also played in the first ever Super Bowl, losing to the Green Bay Packers in 1967. They will face the San Francisco 49ers on February 2 at Miami’s Hard Rock Stadium, looking to break the second-longest championship drought by a team that has already won one; the last time the Chiefs played San Francisco, they won 38-27 in the third week of the 2018 season. They are consensus favorites to win, as nearly every sports betting website has the Chiefs at a slight advantage.