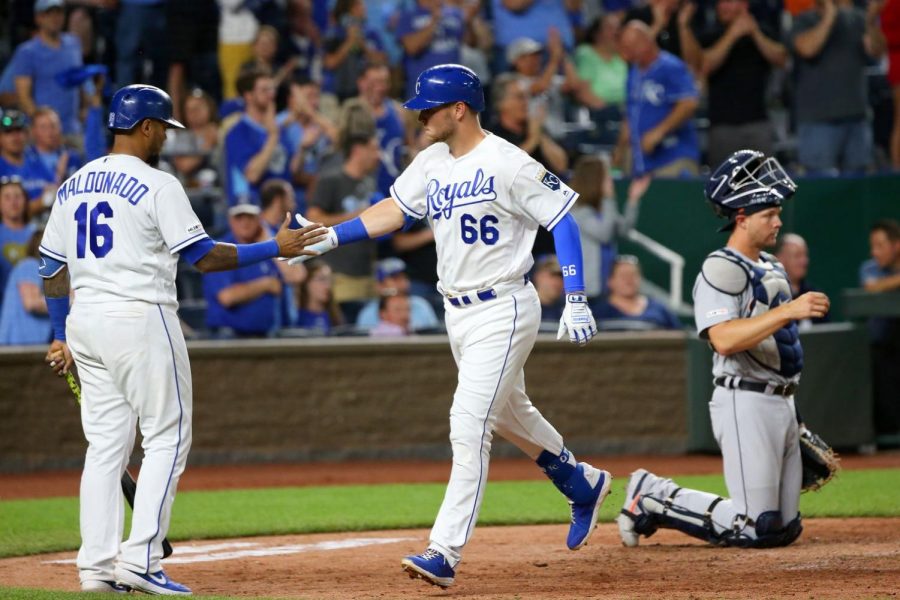 Ryan O'Hearn, first baseman, is greeted past home plate by teammate Martin Maldonado, catcher, after blasting a home run. O'Hearn's season was marred by inconsistency, hitting under .200 with a well-below average OPS.

Ryan O’Hearn’s 2019 season saw a disheartening turn of events that sank whatever expectations Royals fans had for him; his batting average plummeted below the Mendoza Line and in more than twice the at-bats, he accumulated only two more home runs than he had in 2018. However, his season may not have been as big a waste as it may seem on the surface.

After beginning his career with a home run in his second Major League at-bat, O’Hearn continued to go on an extended power surge, hitting 12 home runs in only 149 at-bats. That, along with ten doubles and two triples, saw his slugging percentage finish at .597 which would have been good for fifth in the Major Leagues had he had enough at-bats to qualify, ahead of names such as Nolan Arenado, Khris Davis, Alex Bregman, and Javier Baez. However, he significantly regressed in 2019, hitting only .195 with a .650 OPS and .369 slugging percentage, which would have been ahead of only four out of 136 qualified hitters.

Two main factors can be seen as a success for O’Hearn and provide hope for 2020. The first is his second-half performance, which saw him hit a solid .297 with a staggering 1.025 OPS in his final 28 games played. This vastly out-performed Eric Hosmer, whose spot O’Hearn took after he left for San Diego in free agency. He had six multi-hit games, though this relatively low number can be attributed to the fact that he had two or less at-bats in ten of those games played.

The second factor is how hard he hit the ball all season long. O’Hearn would consistently hit it on a line, but his launch angle was too low to get over fielders’ heads, as shown by his average launch angle and average exit velocity. His 13.0 degree launch angle was well below his 2018 average of 17.7, and though his exit velocity was down 0.9 miles per hour to average 90.5, it was nearly four percent above the MLB average and ranked in the 76th percentile for Major League hitters. His hard-hit percentage was also a marvelous 43.7 percent, which was in the 78th percentile.

A large hindrance during O’Hearn’s year was all of his expected statistics, which are calculated using MLB’s Statcast system. Statcast uses advanced analytics to determine how good a hitter actually is, penalizing things like bloop singles and infield hits and favoring line outs and hard ground balls to vacated spots. O’Hearn had a meager .227 expected batting average (seventh percentile) and .279 weighted on-base percentage (fourth percentile), which are awful. In an age of advanced statistics and stats like these, O’Hearn’s outlook is not good.

Conventional stats are not kind to O’Hearn either. On balls he hit less than 200 feet, 83 percent of them were hit to the right side of the infield; this resulted in massive shifts where the third baseman would play in short right field to get any ground balls that got by the first and second basemen. Despite all this, O’Hearn has remained a constant power threat to all fields, spraying all of his extra base hits relatively equally. In fact, Ned Yost, former manager, put him into a game against the Detroit Tigers, a situation where he was not expected to succeed; it was a lefty-on-lefty matchup, one where O’Hearn had not gone deep at all during the season. He promptly deposited the first pitch he saw into the left field stands, giving the Royals a 6-5 win.

O’Hearn’s 2020 campaign will almost definitely be his make-or-break season; the Royals’ rebuilding phase cannot be stalled by a lackluster first baseman struggling to hit his weight, and if he can’t stick around in the Major Leagues, the farm system has plenty of hungry prospects waiting to get the call to fill his spot, such as Nick Pratto (their No. 10 prospect), Kelvin Gutierrez (No. 17), or Ryan McBroom, who was acquired in  a trade with the New York Yankees and hit a respectable .297 in his cup-of-coffee stint with the Royals.