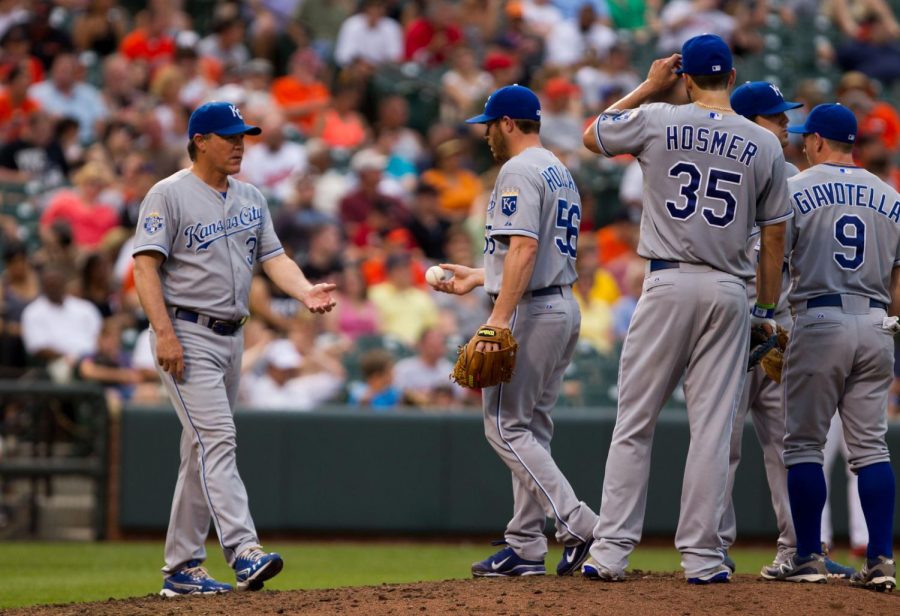 Ned Yost, Royals manager, walks to the pitcher's mound to remove Greg Holland, pitcher, from a game against the Baltimore Orioles. Yost announced his retirement, ending the most successful managerial tenure in Royals history.

After many years of speculation, a new era of Royals baseball will finally begin, as on Sept. 23, Ned Yost, Royals manager, announced that he would retire at the end of the season.

Yost, who turned 65 years old in August, had been at the helm for 10 seasons as a Royal. He is the winningest manager in Royals history with 746 wins, comfortably ahead of Dick Howser, former manager, who won 404 before his death in 1986.

Having led the Royals to two straight 100-loss seasons in 2018 and 2019, many anticipated that Yost would retire after season’s end, as he had indicated that he wanted to hand over the reins to the club before the team’s rebuild was complete. This appropriately completes the circle of life for Yost’s tenure as the Royals’ manager as his first season in 2010 saw the Royals finish with a record of 65-97.

Though many associate Yost with the Royals, he actually began his managing career with the Milwaukee Brewers, where he won 457 games; his time between Milwaukee and Kansas City gives him 1203 career wins, good for 45th all time.

When Yost announced his retirement, many dwelled upon the great times he brought to the city. He is the only manager in franchise history to win two American League pennants, doing so in the magical 2014 and 2015 seasons. However, he only had four winning seasons and as a result only has a .471 winning percentage, leading some to criticize his managing.

Yost emphasized small-ball, which led to an exciting brand of baseball that showcased many stolen bases and sacrifice bunts. One-run games were a staple of Yost’s managing career, as the Royals won 23 games of that type during the 2015 World Championship season.