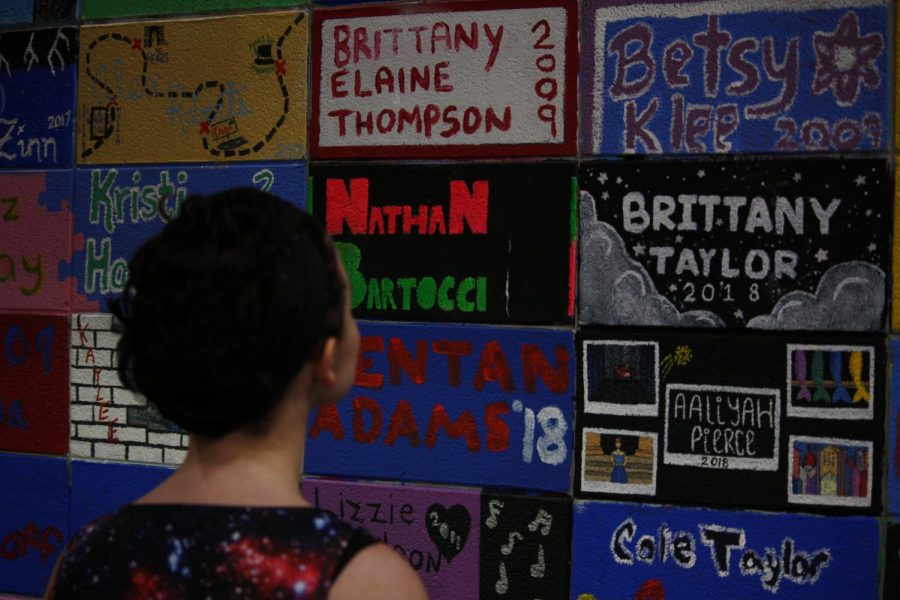 If one were to walk into the scene shop, they would be surrounded by the colorful bricks that paint the walls.

“The first year I was here there was no paint on the walls, my office was just tan and beige” said David Hastings, theater director.

He wanted to make the scene shop his own and started asking students to help transform the dull space into a sight to see.

He encouraged students to design a brick during their last semester of school with things like shows they’ve been in, the year they graduated and their names.

Past students like Liam Chewning and Natasha Arnold who graduated in 2017 have transformed dull colored bricks into beautiful works of art complete with examples of each show they’ve been in and even pieces of art they like.

In fact, Natasha Arnold’s brick is the favorite choice of Megan Weldon, senior. “Natasha has such an artistic personality and it really shows on her brick”.

Weldon also likes the idea of each thespian having their own brick because “you get to leave a mark on the theatre that never gets taken down”.

As of now, Weldon does not have a set idea for what she will do with her brick but has time to figure out a creative idea for her design.

Ethan Christiansen, senior, wants his brick to represent him and wants it to be “colorful and neat”. He also wants it to be professional so that it will last.

John Dawkins, senior, is sure of what he wants to paint on his brick. He wants it to be Beauty and the Beast inspired because of his role as the beast in the musical.

“I definitely want something that has to do with Beauty and the Beast whether that be an outline of the beast or a rose; something related.”

He has a few favorite all-star bricks in mind but his favorites are “one that has a piano” because the “detail is insane!”

Aaliyah Pierce’s brick from last year has also made his list. “She has polaroid’s of different shows she’s set designed for and its super aesthetic”.

Some students are looking forward (and ahead) to their brick for their last year. Junior Hayley Cogbill says if she could make her brick right now it would include her name and all of her favorite lines of show’s she’s been in surrounding it.

Her favorite brick is Ethan Potters because he was one of the people that inspired her to get into theatre and “his brick represents where he connected the most when doing shows at south”.

This year the new group of seniors is preparing to paint their bricks and looks forward to putting their inspiration into their designs.