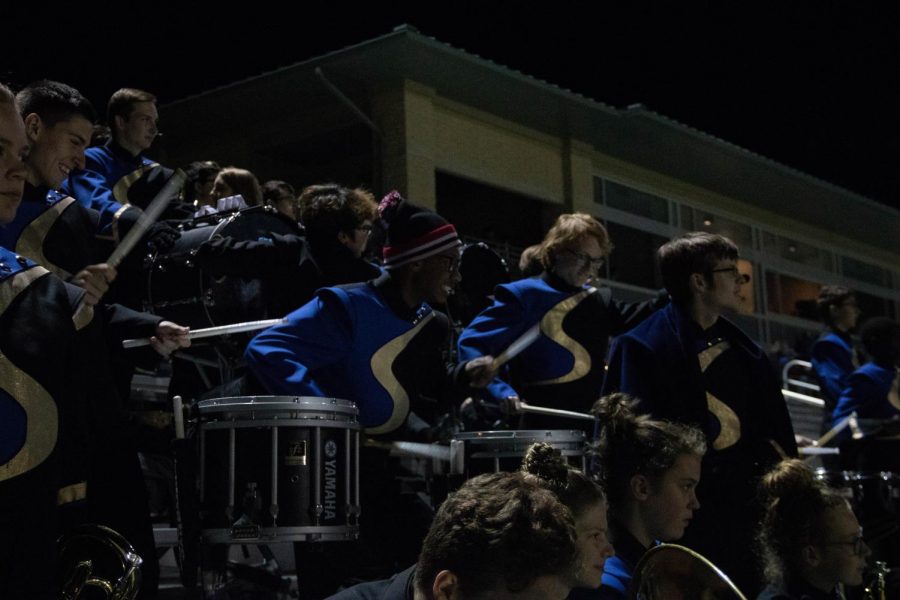 The Falcon Regiment ended their season this year at the Kansas Bandmasters Association Marching Competition on Oct. 20. The band received 6th overall and 3rd in their division.

They also performed at the Shawnee Mission North invitational on Oct. 13, winning third in their division.

The Lee’s Summit North Marching Invitational was held on Oct. 6 It was moved indoors due to severe weather, but the Regiment went anyway.

Scores were the highest in this competition, as they received second place.

Rehearsals took place every weekday morning except for Thursdays. They started exactly at 7:00 am and went to the end of first hour. There were also rehearsals on some Tuesday nights to practice music and marching.

The band played at halftime for every home football game this season, but stopped after the first home playoffs game.

They played selections from Ode to Joy, Joy to the World, Little Fugue and The Promise of Living. These pieces were arranged for marching band purposes by Patrick M. McCarty.

“We got to dance around and just have fun,” Stanley said.

The tubas were featured in “Don’t Worry Be Happy” by Bobby McFerrin and “Can’t Stop This Feeling” by Justin Timberlake.

According to many band students, there was a noticeable change in performance this year.

“This year is a lot more of a happier theme and the music is easier,” Stanley said, reflecting on previous years.

“We had a lot more commitment this year,” Nichols remarked.

Gagani Liyanawaduge, sophomore, noticed “a lot more people in band are more dedicated to the program because of all the hard work that was put into it.”

With the end of the marching season, concert band season has begun. The winter concert takes place on Dec. 10.