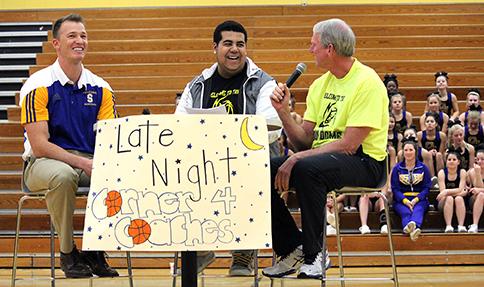 The boys and girls basketball coaches were "interviewed" at Late Night at the Southside.

In the Falcon Dome on Dec. 2, kids, parents, students and staff alike caught a glimpse of what would soon come in this year’s basketball season.

To get into the event, a canned food item was taken as an admission ticket.

All the cans were donated to Southside, an organization that helps provide food to people in need.

Morrow’s life more reflects the song of Will Smith’s “Gettin’ Jiggy with It” and Ingram more represents that of ZZ Top’s “La Grange.”

However, both coaches agreed that they want to be dunkers instead of shooters.

Ingram didn’t dunk a lot in his youth, so he wishes he could do it more.

Morrow stated that dunking gets the crowd more into the game than a three-pointer.

Ingram and Morrow both have participated in Late Night for four years.

“I like how it brings more excitement for the upcoming season,” Ingram said. “It’s a fun beginning to the year.”

Both the JV and varsity teams for boys and girls scrimmaged for two, six minute periods toward the end of the event.

The girls JV and varsity got to showcase their skills first in a very tightly contested game.

The game had many lead changes, ultimately ending in a tie.

Makayla Gooch, sophomore, had a shot from half court with the help of her teammates, creating space with a two-person screen.

“I liked her shot,” Ingram said. “This event is really for fun and not a real evaluation of the team, so it was okay.”

The boys JV and varsity got to showcase their skills as well, only not as contested as the girls game.

The only basket scored by the JV squad was an up-and-under layup by Elijah Taylor, freshmen.

The freshmen and Varsity drill team performed between games and prize drawings were held throughout the event.

“The performance by the drill teams were nothing short of amazing,” Nathan Lintz, junior, said. “It was by far one of the best things I saw.”

“I noticed that they didn’t do the staff versus alumni game,” Lintz said, “If they brought that back in, that would add some more time and excitement.”

Sam Hengeli, junior,  is in his second year of playing for the school and first year playing for JV.

“I would like to see that many people at our games,” Hengeli said. “It would make us bring our intensity to a whole new level.”

Late Night is set up to help the community while at the same time  provide a preview to basketball fans.