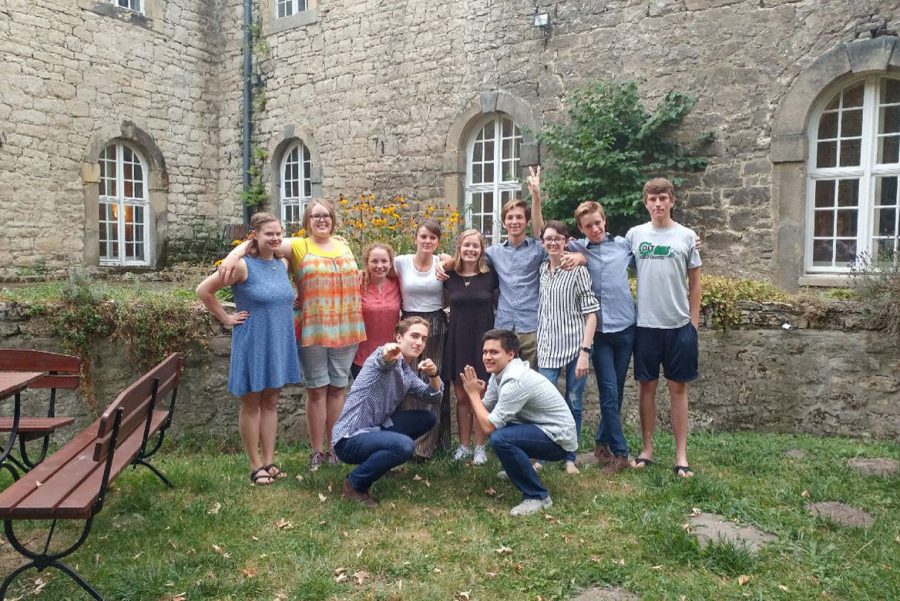 Students who participated in studying abroad meet after a year apart. Having been all over Europe, Sean Yake, senior, recommends others take part if given the opportunity. However, they are glad to be home.

Travelling abroad to study is an opportunity not many students receive.

Sean Yake, senior, travelled to Germany last year during the beginning of the 2016-2017 school year to study abroad.

Varying from student to student, travelling abroad to study presents itself with different challenges, such as the language barrier or adjusting to cultural changes.

“Meeting new people was the hardest adjustment,” Yake said. “It took about a month [to adjust].”

However, these obstacles didn’t stop Yake from learning from his experience in a positive way, especially after his adjustment.

“My favorite part was the language, being able to say whatever,” Yake said.

As time passed, Yake’s fluency and understanding in the German language grew and it really began to show.

Yake also mentioned that he eventually participated in school in Germany almost more than his fellow German-speaking classmates, answering questions and giving his input on topics in class.

“My host brother told me if he heard me on the phone, he wouldn’t think twice about me being fluent,” Yake said.

Spending almost a whole year in a different country, Yake travelled all over Germany and even explored other areas of Europe.

“I travelled to France, the Netherlands, Spain and Belgium,” Yake said. “[In Germany], Berlin was my favorite; you could feel the history.”

Yake stayed with two different host families during the duration of his stay: one family in Eastern Germany and another in West Germany.

“I would highly recommend [staying with a host family],” Yake said.

Another adjustment Yake had to make were for the cultural differences between the United States and Germany.

“In Germany, everyone shakes hands, even teenagers,” Yake said. “The more elaborate the handshake, the closer the people.”

Even little adjustments had to be made by Yake, such as environmental habits.

“They are extremely environmentally friendly. They don’t even have dryers for their clothes,” Yake said.

After arriving home, Yake has noticed a significant change in his German skills, including during his German classes.

“My skills in [German] class are way better after my trip,” Yake said.

Language teachers often reach out to students with opportunities to study abroad. However, anyone interested can check on more opportunities in the counseling office.