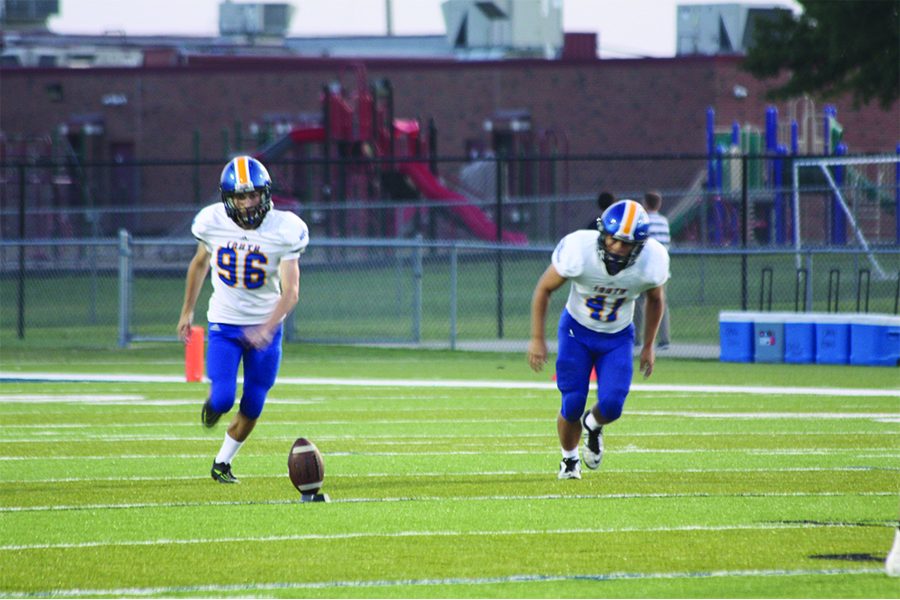 When the special teams unit comes out to try to nail a field goal, something on the field is different than in years past. The average fan may not realize it, but the kicker is actually a freshman.

Adam Young didn’t have high expectations for his freshman year. He hoped to make the freshman team and move up from there. However, when he was told he made the football team, he also discovered he was going to play on the varsity team.

There is a big leap going from freshman games all the way up to varsity. “It is very different, but the biggest difference I find between the two is the atmosphere at the games and how energetic it is,” Young said, adding that there is also a larger amount of pressure on his shoulders as he sets up for a kick.

So far Young’s varsity career has started on somewhat low note, going 5 for 8 (63 percent) on extra points, and 0 for 1 (0 percent) for field goals at the varsity level, as of Oct. 3.

Craig Lewis, head coach, said he isn’t concerned about the kicker, saying, “Each time he misses he is fundamentally doing something wrong, simple things that he does right at practice most of the time. When he gets confident in being in a big stage, he will be fine.”

Young is also on the JV roster, doing significantly better, going 12 for 13 (92 percent) on extra points.

Lewis also noted that he was by far the team’s best kicker, and because he has “all kinds of potential, it is the obvious choice.”

Because Young is a freshman, it could be expected that the upperclassmen on the team might have a different reaction than if it were a junior or senior. Young said, “They have embraced me quite a bit, but in the end it’s just another person playing football. For sure I get picked on all the time, but they’re very supportive of me as well, and I appreciate them for that very much.”

Young, who hopes to play on the varsity team for all four years of high school, currently kicks more for accuracy than distance, but Lewis said that as he gets stronger, he will be able to kick the ball out of the end zone without any issue.