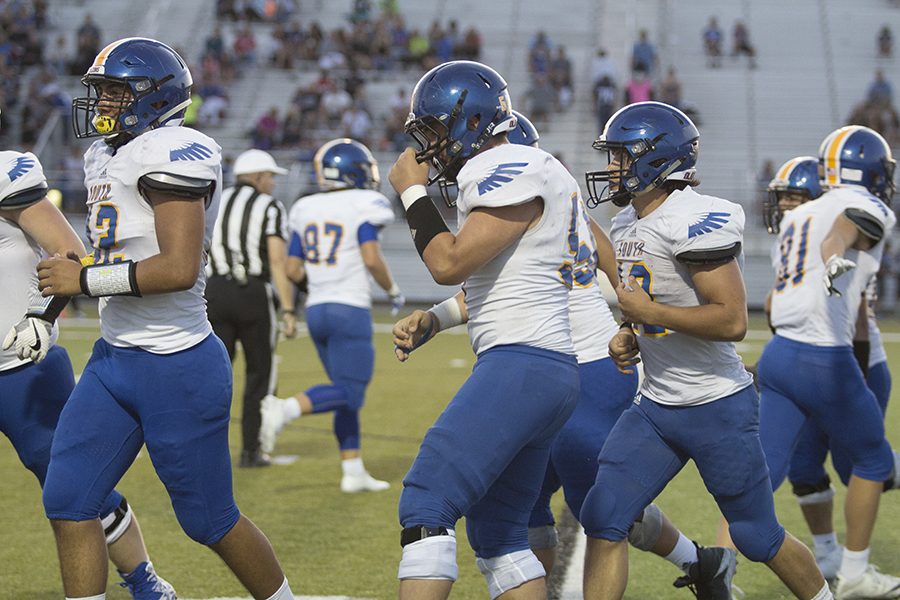 Fall sports have been training and working hard in hopes of achieving their goals.

This season the football team will be cracking down on the basics, focusing on fundamentals like technique, form for blocking, tackling, and toughening up so that they can pave their path to district, state, and conference champs.

The main goal for Craig Lewis, head coach, this season is for “the guys to perform at their best” and to end the season better players than when they started.

Mike Spotts, assistant coach, wants to see the team work hard and stay healthy, so they can prevent any further injuries than they have started with.

Lewis said there are many standout players in the varsity line up like Jamison Phelps, Adrian Garcia, Nick Jouret, seniors, and Kolby Murphy, junior, who work hard and are leaders on and off the football field.

Both Lewis and Spotts believe Lawrence Free State will be the team’s toughest opponent; that game is Thursday, Sept. 28, at the Olathe District Athletic Center (ODAC).

Last year, the boys soccer team ended their season with five wins, 10 ties, and two losses. This year, the team is focusing on chemistry as a team and the fundamentals of soccer.

Will Stoskopf, head soccer coach, said, “This year the team is off to a good start. The team made covenants for the season for what they want to be recognized for. Their covenants are family, intentness, tenacity and trust, which spells the acronym F.I.T.T.”

The team has also worked on getting in better shape during the off season and staying fit throughout the season.

Their biggest challenge is to stay focused every day and to work hard till the end of the season. According to Stoskopf, Olathe East and Olathe Northwest will be their toughest games, along with the Sunflower playoff game, which is new this year.

Their next game will be on Sept. 26, against Olathe West at College Boulevard Activity Center.

The cross country team has been training a lot in hopes of getting top three at the state meet.

Zachary Pope, head coach, said, “On the boys side, our main two goals are to make it back to the state meet as a team and finish on podium. On the girls side, our goals are to continue to become more competitive in our varsity races and finish in the top eight at the Sunflower League meet.”

The biggest challenge this year is staying healthy while training. Most of the athletes run 40 to 50 miles a week and have to be careful about not injuring their legs.

Right now, the team is focusing on building their strength and endurance by going on long runs that are eight to 12 miles.

Their next meet is on Sept. 23 against Lawrence.

The fall sports season is finally here, and that means it’s time for the girls tennis team to start competing for another winning season.

The team will be looking to build on what they accomplished last season, ending the year placing fourth in state competition.

The season has gotten underway on a positive note as the varsity team won its first match against Shawnee Mission West on Aug. 31.

“We went in with a good mindset, and we executed our game plan well,” Andrew Davids, head coach, said.

Captains Kennedy Menke, Rylee Zuck and Emma Bundy, seniors, will guide the team, made up of 19 total players.

Davids is looking forward to seeing his team on the courts, saying, “We have all of our varsity team back, so hopefully the returning core can improve.”

The Falcons will try to repeat what they did on the court on Sept. 25 when they take on the Emporia High Spartans.

Volleyball has yet to end, but so far their record is 6-22. Sixty people tried out for the volleyball program on Aug. 14-16. Nine people were cut after three days.

The girls golf team has started another season on the courses, and Matt Croft, head coach, will try to have his squad build on the success they found last season.

Finishing in fourth place of 12 teams last year, they will try to finish in the top three, but overall they will aim to once again be serious contenders in the Sunflower League.

“The team grew together through adversity and kept working hard to get better every day,” Mark Smith, former coach, said of his team.

The team suffered a big hit with the seniors of last year leaving, losing star player Claire Beeler, graduate. “She was a four-year letter winner, three-time state qualifier, and team captain,” Smith said. “Losing a consistent contributor hurts a team without a lot of depth.”

Sydney Lake, team captain, will do her best to replace Beeler, as she is now the captain of a team made up of 18 players. “I’m really excited about her. I think she’ll qualify for state again,” Croft said.

The varsity team teed off their season on Sept. 5, finishing in third place due to a tiebreaker.

The golf team has high aspirations for this season, and will do whatever it takes to bring home a championship.