Students explain their passion for archery 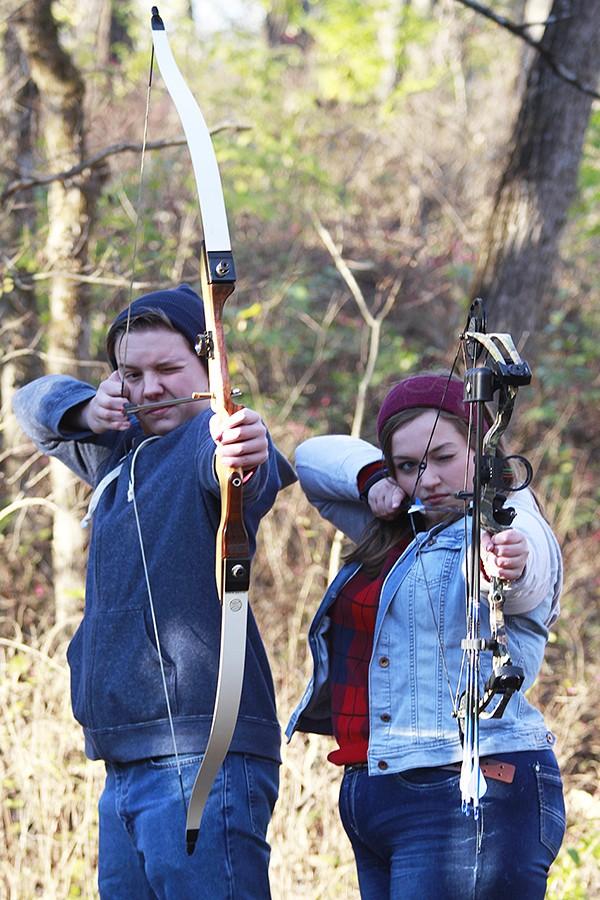 Chase Simmons and Brittany Taylor, sophomores, work on perfecting their stance to get a good hit.

Archery is a unique sport that doesn’t require a team. It’s just the archer and the bow.

Taylor started archery two and a half years ago.

“One Christmas I just decided to go out and buy a bow,” Taylor said. She soon began to teach herself the sport.

About a year later, Taylor invited Chase Simmons, sophomore, to try it out with her.

“Brittany just asked one day,” Simmons said. Simmons also had received influence on the sport from his late great grandfather.

Taylor and Simmons practice at the Prairie Center range, or as Simmons refers to it, “right over Gumdrop Mountain.” It’s about a 20 minute drive to the range.

“I just get into the car and hope Brittany doesn’t kidnap me,” Simmons said.

The range is free to practice at and includes a variety of areas out in the woods, including a downhill range.

The preferred equipment for the pair is a compound bow for Simmons and a recurve for Taylor.

Simmons’s compound has a 45 lb. pull while Taylor’s recurve is between 25-35 lbs.

The pound count is how hard it is to pull back the bowstring.

The hours spent practicing can be fun and memorable. New experiences emerge along with hilarious stories to share.

“One time I was trying to shoot a pretty far away target, and I shot a metal pole. My arrow pretty much mushroomed itself inside. The head went inside the arrow so all the aluminum spread everywhere. It was like a mushroom, and I was like ‘oh, gosh’! It was so loud!” Taylor said.

One of the fletchings is deformed, which makes its flight path unpredictable.

Once, when Simmons was shooting for a target to the top left, the arrow curved around mid-flight and struck the bottom right bulls-eye.

The first bow, the first target hit, and the first bulls-eye are experiences that bring pride and enjoyment.

Though the duo have devoted many hours to learning, they are still absorbing new knowledge each and every time they practice.